I would guess that over 90% of all Windows computer users have played Solitaire. It may very well be the most-used Windows application ever. 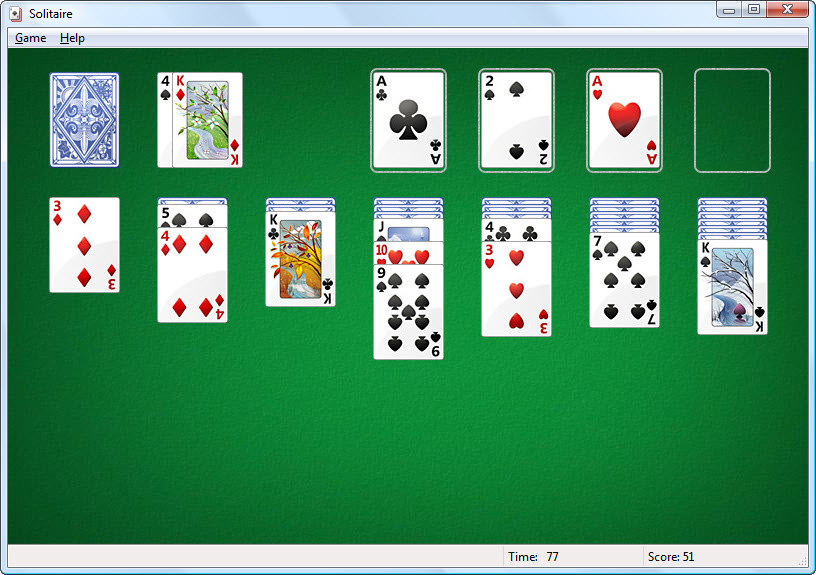 Below are the complete rules of the Solitaire tournaments at Game Colony.

Object of the Game
The object of the game is to use all cards to build up the 4 suit stacks in ascending order starting with the aces.

Playing the Game
As the game proceeds, the 7 row stacks on the bottom are build only as an intermediate holding place for eventual build-up of 4 suit stacks.

When there are no moves to make in the row stacks, go through the closed deck (upper left corner), turning one card up at a time (in the 1-card variation) or three cards at a time (in the 3-card variation). As the cards in the deck are clicked, the y are put face up next to the closed deck. The top card from these open cards is available to move either to the row stacks o r to final suit stacks if there is a place for it there. After going through all of the cards in the closed deck, you can go through it again however, there is a point penalty for this action.

The play continues until all 52 cards have been placed in the 4 suit stacks or until no more moves are possible or until time runs out : five minutes (5:00) is the maximum time allowed.

Moving the Cards
Click and drag to move a single open card from any of the 7 row stacks to another spot in the row stacks, or to any of the su it stacks, etc..

To move a group of cards within the 7 row stacks, click on the highest card in the group, and drag it to the destination card .

To reveal a face-down card in any of the 7 row stacks, just click on it.

If you double-click on an open card in one of the 7 row stacks, and there is a spot in the suit stack for that card, that car d is immediately moved to the suit stack slot.

If you have any questions at all about online gambling, or gambling in general, just send me an email at:

In the above email address, replace 0 (zero) with o (the letter o).

I can help with questions about:

If you’d like to show off your online backgammon skills — and put your money where your mouth is — then GameColony is the place for you. Throughout the day, GameColony offers various types of online backgammon games with real cash prizes. They offer both single and double elimination tournaments, played to various point levels. But your real money maker is playing heads up against other players. There are usually more than one hundred players in the Main Hall, waiting to play online backgammon for real cash.

The way it works is that you purchase tickets via PayPal, use the tickets to enter tournaments in which you can win more tickets, and then cash out your tickets as cash via PayPal.

If you go to GameColony through a link in this blog, you’ll get $10 FREE to start.

If online backgammon isn’t your game, they have all kinds of other skill-based and arcade-style games that you can also play for cash and prizes. I’ll be highlighting some of the additional games in the coming days and weeks.

Three Card Poker (also called Tri-Card Poker) is a popular table game at many casinos. Most casinos, both online casinos and land-based casinos, have reasonable pay tables for winning hands. However, as with most casino games, it pays to shop around for the absolute best returns that you can find.

I’ve analyzed the Three Card Poker pay tables from over a dozen online casino software vendors. Eight of them offer the best pay tables — meaning the lowest house edge, and the best returns for the player. The Three Card Poker from these eight online casino software vendors has a 5.32% house edge, assuming that you play with Q6x or better, and fold otherwise. Here is the pay table to look for:

The eight online casino vendors with this Three Card Poker pay table are as follows:

Good luck at the tables!

If you think that you’re better than most players at skill games like checkers, chess, backgammon, gin, cribbage, dominoes, canasta, and solitaire games, I have a great site for you. GameColony hosts both free and cash skill game tournaments, and players from 35 US States are eligible to play. (Players are barred from: Arizona, Arkansas, Delaware, Florida, Iowa, Illinois, Kentucky, Louisiana, Maryland, Missouri, South Carolina, Nevada, Ohio, Washington and Vermont.).

Here’s how it works:

Good luck at the games!

The updated lobby at Intertops is focused on improved navigation:

Finally, they just released new slots that you’re sure to enjoy:

Luck3 is a fairly new addition to The Online Casino Gambling Directory. They offer casino, poker, and other games and accept players from all 50 states in the US.

I just received word that they are offering $33 Free on any casino deposit on April 3, 2009. Now that’s a pretty cool deal!

(Note: The information present on this blog is intended for entertainment purposes only. Please check your local, state and provincial laws before you gamble online. If your local laws prohibit online gambling then we recommend you consider an alternative form of entertainment.)